They call this type of weight gain “deep fat tissue,” and it leads to deeply felt embarrassment when it comes time to strip down for the neighborhood pool party. It also leads to some more serious issues—heart disease, diabetes and Alzheimer’s among them.

Where your body stores calories depends on your hormones, and some foods trigger just the exact right hormonal reaction—they hit you in the gut like a Dear John letter. Fortunately, new research in Zero Belly Diet, the New York Times bestseller from Abs Diet author David Zinczenko, reveals the six most common “insta-belly” foods, and offers some ingenious alternatives to help you indulge without the bulge.

Eat This Instead: Nip your salty cravings in the bud with Beanitos, a chip made from navy beans, brown rice, oils and spices. This snack time favorite has a texture and flavor reminiscent of traditional nachos, but far less saturated fat.

If you want to get your beach bod

y back, you should cut out sugary beverages and replace them with diet versions, right? Wrong.

Recent studies have found an association between the consumption of diet sodas and a wider waist circumference. What’s more, diet soda drinkers have a higher percentage of belly flab than those who don’t sip the beverage, a study in the journal Obesity found. Why? Researchers think diet soda drinkers may overestimate how many calories they’re “saving,” and then overeat.

Drink This Instead: White Tea. This brew blocks the formation of new fat cells and helps the body break down stored fat, according a Nutrition and Metabolism study. That means that even when you overindulge; it’s harder for your body to store the excess calories in your body. And if you want an added weight loss boost, switch to one of the magical 4 Teas That Melt Fat Fast.

A moment on the lips, a lifetime on the hips? How about this: A night at the Hut, a lifetime in the gut.

In fact, pizza is the second biggest contributor of saturated fat to the American diet (just below cheese itself), and most slices serve up half a day’s worth of the artery clogger. Researchers have found that unlike other fats, the saturated variety is the most likely to be stored in the stomach.

Eat This Instead: Bruschetta. All the crusty, tomatoey flavor, not of the broken zippers. Discover the recipe, and the game-changing “75/25” rule that shows How Maria Menounos dropped 40 pounds—and kept it off! 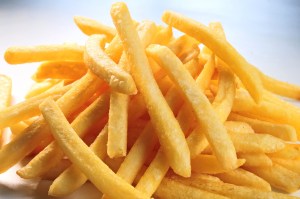 Any fat-laden carb fest will make you gain weight, but there’s something almost magical about the effect of fried spuds on your body’s fat-storage system–and by magical, we mean Voldemort, not Potter. One 20-year Harvard study found that people who ate fries regularly gained more than three pounds of body weight every four years; over the course of the study, the French fry eaters gained 15 pounds of belly flab from fries alone!

Eat This Instead: Homemade sweet potato fries. Slice a sweet potato lengthwise into strips, top with a few spritzes of coconut-oil cooking spray (a fat less apt to be stored as flab than butter or lard), salt, pepper and garlic powder, and pop them into the oven on 350 degrees F until they’re crispy. When dining out, ask for a side salad and a vinegar-based dressing in lieu of the fries that comes with your meal. And for the full list of what to eat for rapid weight loss, check out these essential 14 Ways to Lose Your Belly in 14 Days!

Wait—don’t toss your steak knife at us yet! Studies show that eating the right cuts of steak can actually help whittle your middle. But rib-eye, along with T-bone and New York Strip, is one of the three fattiest cuts known to man or cow; in a study by Chinese researchers, consuming a diet rich in fatty, fresh red meat is positively associated with abdominal obesity and larger waist circumference.

Eat This Instead: Choose the right steak and you’ll reap several health benefits. Find out which to buy in the essential list of ab-defining 12 Foods Personal Trainers Swear By.

It’s natural! It’s packed with Vitamin C! It comes from Florida! What could be wrong? Well, while 100 percent fruit juice is a better pick than sugary drinks like Sunny D, even the all-natural stuff still packs up to 36 grams of sugar per cup—or about what you’d get from popping 4 Krispy Kreme glazed donuts into a blender and hitting frappe. What’s more, most of the sweetness in juice comes from fructose, a type of sugar associated with the development of visceral adipose tissue—yep, that’s belly fat.

Drink This Instead: Trick your belly into shrinking itself by filling your glass with some refreshing spa water. Just add fresh sliced fruit like oranges and grapefruit to plain ol’ H20 and chill. The key is to keep the peels on: citrus peels are rich in the antioxidant d-limonene, a powerful compound that helps flush out toxins from the body and allow it to release stored visceral fat.

Sometimes we cause ourselves much dreaded pain, because we don’t let go emotionally.

Every 30 days for the past 10 years, I pull a word or a phrase from a blessed bag that contains 12 words or phrases that were researched and found by myself and a few loved ones prior to the start of every New Year. I believe spirit places the selected word into my hand, and this is the word or phrase that I need to focus on and master for the next 30 days. June 1st, I pulled the phrase, LET IT GO. What initially came to mind when I pulled this is that I need to take my hands off all situations that are beyond my scope or control, and let the creator do His job.

By nature, I tend to want to control my own destiny, orchestrating the way I want things to go or expect that they should go. When the outcome is less than desirable for me…

Just like styles are cyclical, so are life’s circumstances. However, there are some experiences that we never want to repeat, but how we handled them the first time around or rather how we didn’t handle them the first time they occurred, may cause certain outcomes to be redundant in our lives.

As much as we look forward to our future, we also fear what it could bring — responsibility, commitment, hard work, uncomfortable situations, and non-productive relationships. These fears cause us to remain motionless to our dreams, leaving us in a dormant state of mind. This in turn creates unwanted recurring behaviors that we choose to reproduce because the outcome is
familiar and sadly, comfortable.

Some recurrent behaviors are nice surprises that softly tickle our noises like a feather. Making us smile and feel the warm and fuzzy of nostalgia. These circles remind us of inclusion and positive friendships that have…

Have you ever heard of lectins? Could you give me the one sentence summary of what they do to you? This column will teach you what that means.

Lectins are the proteins made by plants to protect themselves from their predators. They are, in effect, poisons that prevent the plant from being eaten. Plants need to be eaten to propagate – at least their seeds do. That delicate balance leads to lectins needing to be poisonous enough to keep the bugs away long enough so that animals will eat the seeds and spread them around.

Animals need to be able to tolerate the poison to not be too harmed, but still be benefited by eating some of the plant while spreading the seeds around. Lectins are sticky. That results in many useful functions, such as allowing cells to bind to one another, like Velcro. But it also leads to lectins binding to…

Heddy Keith M. Ed, CH is a Certified Hypnotherapist with the National Guild of Hypnotists. She is a retired Milwaukee Public Schools Language Arts teacher and founder and president of the Milwaukee Writer’s Circle. Her writing includes: memoir, poetry, and blogs. She is writing her healing memoir, Through it All: The Men I Choose to Love and the Lessons learned.